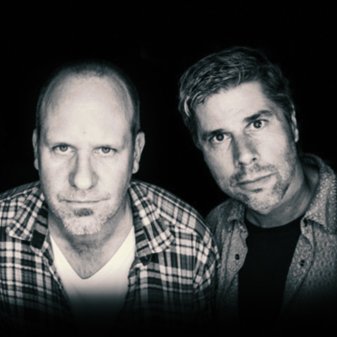 The Smokin' Novas are Andrew and Brian who are both accomplished musicians & songwriters leaving their mark on music for over two decades. They have written and released two albums including their self-titled debut record in 2014 and Travel Mercies in 2022.   Their music has been featured in international films, received a top 10 album of the year award in Europe and been heard throughout the US.

Andrew Hyra started his career with the folk rock duo Billy Pilgrim in the early 90’s. He and band partner Kristian Bush (Sugarland, Dark Water) released albums for Atlantic Records earning them multiple Top 5 singles on the AAA charts, rotation on VH1 and an extensive touring schedule throughout the US & Europe. From a very creative family (his sister is Hollywood actress Meg Ryan), Andrew has been playing music and writing great songs for many years, creating stories that are true to life and connect with audiences through his sublime lyricism.

Brian Bristow started his career in the Athens, GA music scene then moved to the stages of Atlanta, GA as a founding member of The Tastemakers. During this period of his career, he shared the stage with many national and international artists including Cheap Trick, Meat Loaf and The Romantics amongst many more notable names in the industry.

Brian was a founding member of The Highlanders where he met Andrew whilst recording their album. Andrew was asked to guest on the album by singing one of the tracks at a studio in LA where he lived at the time. The pair quickly became aware of each other’s musicianship but it wasn’t until Andrew moved back to Atlanta where Brian resides could they really start to begin conjuring up the magic you are about to hear.

The two immediately started writing songs and the debut album resulted in poignant lyrics and slick guitar arrangements all produced by Don McCollister, a Grammy Award winning producer who has worked with Andrew on several records, most notably Billy Pilgrim’s debut album on Atlantic in 1994.

John Keane (REM, Widespread Panic) who produced The Highlanders, was prominently featured throughout the debut album playing pedal steel , electric guitar and background vocals and he has played on nearly all of the tracks on the bands second album that was released in the spring of 2022, ‘Travel Mercies’. John also joins Smokin’ Novas when they perform as a trio.